If you’re an avid HGTV watcher, like myself, you’ve probably seen one of the many shows geared toward house flipping and renovation.  While the entire process is condensed into either a 30 or 60 minute show, I didn’t realize everything else that occurs behind the scenes but thanks to my parents, I have learned quite a bit about house renovation in the past year.

My parents started their adventure into the house renovation business in the Summer of 2015 after starting a business with my brother, Trey, and family friend and contractor, Rick Rockwell.  Rick specializes in restoring historic Charleston homes to their original character and since my dad, who grew up in downtown Charleston, wanted his focus to be on historic downtown Charleston, the pairing could not have been better.

The lucky winner ended up being a house on Poinsett street, located in the North Central neighborhood.  North Central is close to Upper King Street and Rutledge Ave.  It is also a hop, skip, and a jump away from Morrison Drive which is home to both Edmund’s Oast and Tattooed Moose (two of my favorites).   It is also a neighborhood with a great deal of real estate investment potential so I can absolutely see why my dad chose this area.

And now I present to you, 40 Poinsett Street: 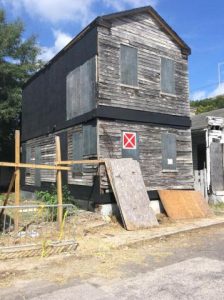 To say this house was a fixer upper was the understatement of the year.  I am sure you are asking yourself   “Why wouldn’t you just tear it down and start fresh?”.  Downtown Charleston has a governing body known as the Board of Architectural Review whose purpose is “preservation and protection of the old historic or architecturally worthy structures and quaint neighborhoods which impart a distinct aspect to the city and which serve as visible reminders of the historical and cultural heritage of the city, the state, and the nation.” This means that in addition to the permits one has to get when building or renovating a property, you also have to get the approval from the BAR.  Thankfully, my dad knew all this this before buying the property so he was prepared for the extra hoops to jump through.

October 2015 comes around and my parents close on the house.  My dad’s first order of business was clearing out the yard.  He’s a DIY kind of guy so he was able to get a lot done himself along with some help from my brother and boyfriend.  The house had been abandoned for approximately 40 years so he definitely had his hands full with the yard for a couple months.  February 2016 began the start of obtaining permits and getting the green light from the BAR to proceed with the design plan.  (This can be an arduous process because it is generally unheard of to obtain the go ahead on the first try with the BAR) After months of speed bumps and probably a few “Why did we decide to do this again?” conversations, we are now in August 2016 and my parents are finally able to talk about an interior design plan.  My mom has quite the knack for interior design so this is right up her alley. I also love interior design so it was fun for my mom and I to discuss different options.

I’ll be posting another update in the coming months so be on the look out.  This house is going to look great when it’s all said and done.

Do you have any questions about historic downtown Charleston or maybe you want to invest in a fixer upper?
Call or email me, I would love to help!